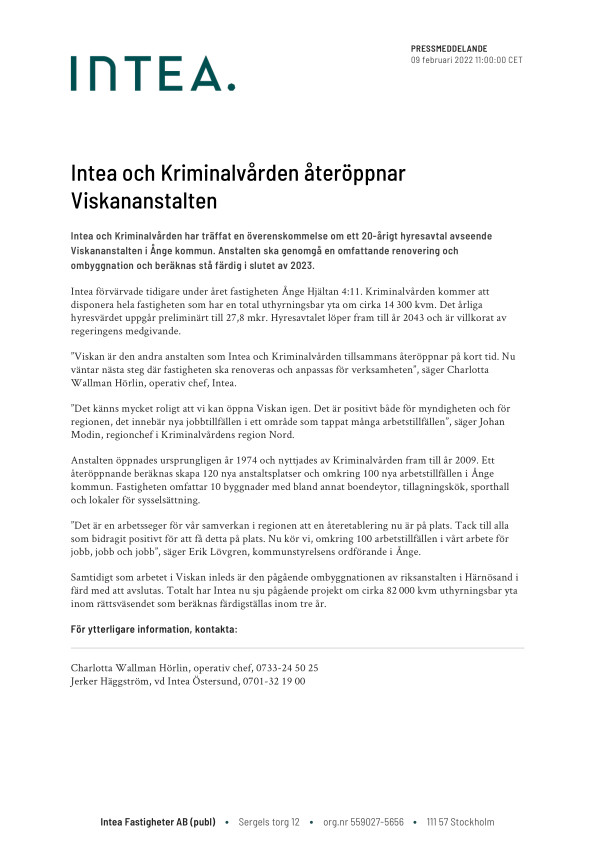 Intea and the Swedish Prison and Probation Service have reached an agreement on a 20-year lease agreement regarding the Viskan prison in Ånge municipality. The prison will undergo a major renovation and is expected to be ready for occupancy by the end of 2023.

Intea acquired the property Ånge Hjältan 4:11 earlier in the year. The Swedish Prison and Probation Service will dispose of the entire property, with approximately 14,300 m2 lettable area. The annual rental value amount to approximately SEK 27.8 million as a preliminary estimate. The lease agreement runs until 2043 and is conditional upon the approval of the Swedish government.

”Viskan is the second prison that Intea and the Swedish Prison and Probation Service will reopen together in short time. We will now take the next step where the property will be renovated and adapted”, says Charlotta Wallman Hörlin, COO of Intea.

The prison was originally opened in 1974 and was used by the Swedish Prison and Probation Service until 2009. A reopening is estimated to create 120 new prison cells and about 100 new jobs in Ånge municipality. The property comprises 10 buildings with, among other things, living space, cooking kitchen, sports facility and premises for employment.

“It is a big success for our collaboration in the region, that a re-establishment is now in place. Thanks to everyone who contributed positively to this. Approximately 100 new job openings is a great result of our efforts to create employment opportunities ", says Erik Lövgren, chairman of the municipal board in Ånge.

Whilst the work on Viskan begins, construction of the Härnösand prison is in its final stages. In total, Intea has seven ongoing projects of approximately 82,000 m2 of lettable area within the Swedish legal system, which will be completed within three years.

Intea was founded in 2015 with a focus on long-term active ownership of social infrastructure. At 30 September 2021, the value of the company’s property portfolio amounted to SEK 14.6 billion, with a lettable area of 417,000 sqm. The portfolio consists of properties and projects with public-sector tenants in segments such as justice, higher education and health care. Find out more at www.intea.se. www.intea.se

This website uses cookies to improve your experience while you navigate through the website. Out of these cookies, the cookies that are categorized as necessary are stored on your browser as they are essential for the working of basic functionalities of the website. We also use third-party cookies that help us analyze and understand how you use this website. These cookies will be stored in your browser only with your consent. You also have the option to opt-out of these cookies. But opting out of some of these cookies may have an effect on your browsing experience.
Necessary Alltid aktiverad
Necessary cookies are absolutely essential for the website to function properly. This category only includes cookies that ensures basic functionalities and security features of the website. These cookies do not store any personal information.
Non-necessary
Any cookies that may not be particularly necessary for the website to function and is used specifically to collect user personal data via analytics, ads, other embedded contents are termed as non-necessary cookies. It is mandatory to procure user consent prior to running these cookies on your website.
SPARA OCH ACCEPTERA
Go to Top